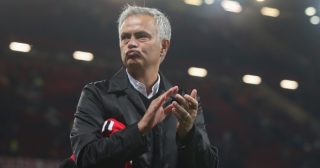 Manchester United never did things the easy way. Even during the successful years under Sir Alex Ferguson, there were moments of drama and madness. We wouldn’t have it any other way.

But this United side is building quite the reputation for itself. An incredible never-say-die attitude which has contributed massively to our recent form after a dire start to the season.

Everything appeared to be falling apart for Jose Mourinho prior to the Newcastle game. There were even rumours that he’d lost the dressing room, as per the Daily Mail, but then why would these players fight on their backs for the manager to turn games around at the very end?

The games against Newcastle, Chelsea and Juventus all stand out as examples of this, and we think this is evidence that Mourinho still controls the dressing room.

Speaking to ManUtd.com ahead of the Manchester Derby, Mourinho was asked a question about United’s attitude over the last few weeks and what he puts it down to.

“I think it’s a collective feeling that everybody is having. It probably comes with the Manchester United DNA. That is something that probably the shirts keep and when you wear it, you have it.

“So even when the moment is difficult, even when the team is not playing very well – which is not the case, because recently our results are a consequence of playing really well – but I think it’s something that’s in this group’s DNA.

“The boys are friends, the boys are proud and when things are not going well, they never say: ‘The game is over’.”

It’s a relief to hear all is well in the dressing room and, hopefully, they can do something special again this week by beating City.