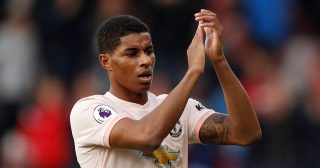 Jose Mourinho has named his starting eleven to face Manchester City in the Premier League.

Manchester United have a chance to close the gap with their noisy neighbours but it will take something special to take all three points from the Etihad.

However, a win away to City was achieved last season thanks to two goals from Paul Pogba and a Chris Smalling winner. Pogba won’t feature today as he’s nursing an injury and it also remains to be seen whether he will fit enough to head on international duty with France next week…

There are no real surprises at the back as Mourinho sticks with Young, Smalling, Lindelof and Shaw in defence, in front of no.1 shot-stopper De Gea.

The midfield sees Matic as the anchor, but his performance levels will need to be at their best to contain City. He will be partnered by Herrera and Fellaini in Pogba’s absence.

Sanchez has been dropped to the bench, with Rashford expected to lead the line. The England international will be surrounded by Martial and Lingard on the flanks.

🔴 In the red corner… #MUFC #MCIMUN