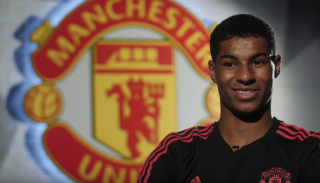 Marcus Rashford and Jesse Lingard are both looking forward to the Manchester Derby.

In a video on Manchester United’s official YouTube channel, the pair describe what it means to represent the Reds in the derby, with Rashford opening up about how his mates and brother react when the big encounter comes around, at least twice a year.

The Reds mounted a terrific comeback against City at the Etihad in April as Paul Pogba scored two goals in as many minutes to cancel a two-goal deficit, while Chris Smalling sealed the win with a goal 20-minutes from time.

It goes without saying that the Manchester Derby has become more of a spectacle in recent years. City are a greater force and United have become the sleeping giant.

There’s also that Jose Mourinho vs Pep Guardiola aspect to the rivalry now, previously witnessed in Spain when both managers went head-to-head for the El Clasico.

Without further ado, check out Rashford and Lingard’s thoughts ahead of the derby below: