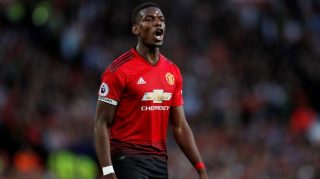 Paul Pogba did not arrive with the rest of the Manchester United squad at The Lowry hotel, according to Manchester Evening News journalist Samuel Luckhurst.

It was reported by The Independent that Pogba trained indoors on Friday after suffering a minor injury.

The 25-year-old is now a doubt for Sunday’s Manchester Derby at the Etihad, giving manager Jose Mourinho something to think about when it comes to naming his starting eleven to face Pep Guardiola’s Premier League champions.

Pogba will be a loss for the Reds. Last season, at 2-0 down away to City, the Frenchman scored a brace to level to scoreline between the two clubs. Then, Chris Smalling volleyed home United’s winner with 20-minutes left on the clock.

Luckhurst adds that Romelu Lukaku is back in the squad for the big match. It remains to be seen whether he will get back straight back into the starting line-up or if Mourinho will stick with Alexis Sanchez as his centre-forward.

Romelu Lukaku fit and back in the United squad for City. Paul Pogba didn’t arrive with the squad at The Lowry. #mufc