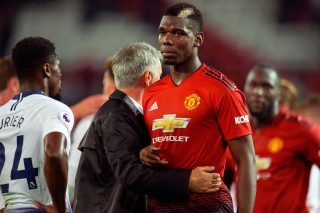 Is this a strategy to smooth tensions or is Mino Raiola really suggesting there’s been a U-turn?

The relationship between Jose Mourinho and Paul Pogba worsened over the last six months, as per The Metro, but Raiola believes the midfielder is back on good terms with his manager.

Back in September, Pogba was stripped of the vice-captaincy, as reported at the time by The Independent. That was one of many contributions that led to the media believing all was not well between the pair, but it’s a relief to hear relations have supposedly improved since then.

Improved relations may have contributed to United’s form of late. It can’t be good for squad morale if there’s constant bickering going on in the background along with bad results.

Pogba’s agent, Raiola, doesn’t say much but confirms that his client has cleared the air with Mourinho.

‘He [Pogba] has mended his relationship with Mourinho,’ Raiola told Raisport, as translated by Calciomercato.

‘He is more serene because he feels important in Manchester. Even if Turin has remained in his heart.’

Typical of a super agent to leave that final line in, rather than throwing away any hope of a return to Juventus, hoping that the Italian giants show an interest in re-signing the France international.

If they paid any attention to his performance on Wednesday night at the Allianz Arena, they’d know better than to fall for Raiola’s line about Pogba and Turin.