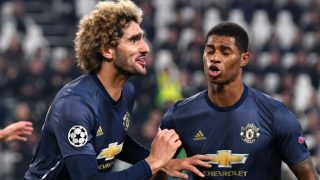 The eyes of the world will be trained on a corner of north west England on Sunday as champions Manchester City meet Jose Mourinho’s in form Manchester United in the 177th instalment of one of the English game’s most storied rivalries.

Last season’s corresponding clash was certainly one to savour as United – not for the first time – staged an incredible comeback to halt the City juggernaut in its track, even though they ended up 19 points clear. But who’s in and who’s out? Here are the men we think Mourinho will send into battle across the road on Sunday…

Despite concerns over his long term future at Old Trafford, Dave remains our undisputed number one between the posts. He may have kept only one clean sheet this season, but that’s more due to those in front of him. Although he’s yet to hit the metronomic heights of previous seasons, he is still comfortably the best goalkeeper in world football.

Antonio Valencia is back available again, but this does not seem the right time to bring back United’s ageing and in decline captain. Ashley Young has been solid if unspectacular recently and is likely to continue at right back in the absence of any viable alternative. He set up the winner against Juventus and will face an ever stiffer test to keep rampant wingers at bay.

These two have both been ever present in the league since August and there’s nothing to suggest that will change this weekend. After chopping and changing his defensive personnel since his arrival at the club, it seems that Mourinho has finally found a venerable pairing that he can rely upon. Lindelof is improving week by week, and Smalling scored the winner at the Etihad last season. It will be another massive task to contain free-scoring City, but Smalling and Lindelof appear to complement each other well and have struck up an understanding.

Shaw has finally done what we all hoped he would after signing from Southampton and made Manchester United’s left-back slot his own. After a blistering start to the season, his recent performances have been solid rather than swashbuckling and with the form of Riyad Mahrez and Leroy Sane (depending on who gets the nod down his flank), Shaw will have to be at his best. Although the Reds continue to struggle for clean sheets, Shaw has been a key cog in a United defence that is becoming more settled by the week.

There aren’t too many selection headaches that Mourinho has to contend with for this game, but who makes up his midfield trio is probably one of them. Nemanja Matic enjoyed a superb debut season in Red, but much has been made of his loss of form and fitness this time around. There have been calls for him to be dropped, but Matic is an ever present and it seems unlikely that Jose would leave out one of his most trusted lieutenants for such a massive fixture. I don’t think Matic should be starting but I expect he will. Pogba (if he passes a late fitness test) is a shoe-in to start as creative string puller in chief and it will be intriguing to see who gets the nod alongside him. Following his impact off the bench in Turin, Marouane Fellaini’s irritating, game spoiling ability may be deployed to disrupt City’s slickers. But it could well be that Mourinho sticks with his winning formula that sees Ander Herrera keep his place.

United’s front three were impressive in victory in Turin, with Sanchez and Martial in particular coming to the fore. It was one of the Chilean’s most impactful and influential games for the Reds. In Friday’s post match presser, Mourinho hinted that Romelu Lukaku could be involved in the derby having returned to training. Lukaku has missed the last three games through injury but appears to be nearing full fitness. Juan Mata is also hard to ignore after his game changing heroics against Juve, but will again probably have to settle for a place on the bench.