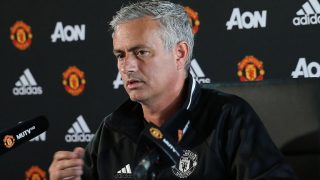 Jose Mourinho is trying to address issues at Manchester United and wants his players to ‘grow up in their approach’ to matches by conceding less goals.

A difficult start to the season saw Mourinho’s job come under question, then a dramatic comeback win over Newcastle at Old Trafford saw his fortunes change. United came from behind again during the week to beat Italian giants Juventus at the Allianz Stadium.

If that’s not a signal of intent, I don’t know what is…

But United have built a reputation of starting games slowly, reawakening in the second half and scoring decisive goals late on in games. We will not be able to afford starting slowly on Sunday against Manchester City.

That’s a warning to the players from Mourinho and he’s bang on in what he’s saying. Mourinho will get criticised for his tactics, but on Wednesday night he got it absolutely bang on.

Such a performance against an elite football side weakens any excuse people will throw up for dropping points against less significant opposition in the Premier League. For instance, the away trips to Brighton and West Ham.

Pep Guardiola’s City don’t need invites to get forward and convert chances. If the defence is in any way lackadaisical on Sunday, we could be in trouble, but the lads proved during the week that anything is possible when they believe in themselves.

This side is maturing but not quite at the rapid rate Mourinho would like.