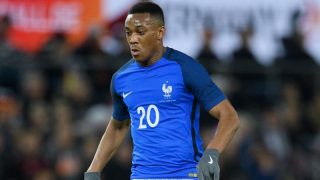 Anthony Martial has been recalled to Didier Deschamps’ France squad for their upcoming fixtures against Holland and Uruguay.

The Manchester United ace missed out on a place in Deschamps’ World Cup-winning squad this past summer, but has now reached the form of his career and deserves to be recalled.

Martial has scored five goals in his last six appearances for United and he was one of the stand out performers in Wednesday night’s 2-1 win over Juventus.

Not only has Jose Mourinho restored faith in the 22-year-old Frenchman, Martial appears to have also won over Deschamps, who already has an array of attacking talent at his disposal.

However, it remains to be seen whether Martial will start any of the two games.

With Kylian Mbappe and Antoine Griezmann starring in the squad along with other respected names competing for attacking positions, this is a clear sign that Martial’s form has not gone unrecognised.

United teammate Paul Pogba is also in the squad.

See the full France squad below: