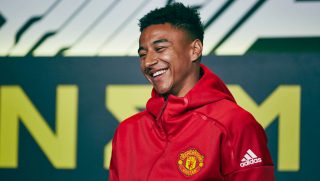 Jesse Lingard started against Juventus on Wednesday night as Manchester United beat the Italian champions 2-1 at the Allianz Arena.

It was far from a straight forward victory as Juventus created more chances, hit the woodwork twice and played the majority of the game in United’s half.

But the Reds worked hard to contain Massimiliano Allegri’s side and took their chances in the dying minutes to take all three points in the UEFA Champions League Group H clash.

However, Cristiano Ronaldo scored the opening goal against his former club after the hour mark and celebrated by lifting his shirt to show the world his toned body.

The following day after the game, Lingard took the opportunity to make fun of Ronaldo’s celebration by putting a picture of his six-pack alongside a shirtless photo of himself.

We’ve got your corner, Jesse!