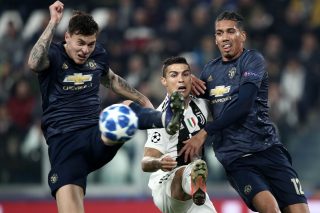 Manchester United stunned Italian champions Juventus with yet another unbelievable turnaround to move into a strong position in Group H. The Reds are making a habit of this, and once again showed that, on our day, we are capable of mixing with the best. Here, we rate the United players at the Allianz Stadium.

Made one excellent save from Juan Cuadrado in the first half. Powerless to prevent Juve striking the woodwork twice and there was nothing he could do about the wonder goal scored by his former teammate. No keeper in the world could have saved that. Despite Juve’s dominance, he was left a spectator as many of their shots flashed wide of his goal from distance.

Can’t fault his effort, tried to go forward when possible but, when he did, his crossing caused problems let him down. A familiar theme in his Old Trafford career, Young did OK but you felt he just wasn’t quite good enough. There were far too many gaps between United’s back four at times and Young seemed caught in a quandary whether to stay back or bomb on. To his credit, though, he stuck to his task and it was from his free-kick that the winner came.

Struggled again. Failed to deal with the long ball by Bonucci that led to Ronnie’s goal and looked nervous every time we tried to contain the Old Lady, one of a number of United players still with question marks hanging over him. Just as he was for the Mandzukic strike at OT, Smalling misjudged the pass and was caught flat-footed. Not good enough and never will be.

This lad is growing in a United shirt. Our best player in the home game with Juve, and was impressive again here despite one mistake that let in Ronaldo shortly after half time. Overall the young Swede had a calm, composed and confident game at the heart of the defence. Visibly brimming with confidence after a consistent run in the side, Lindelof is improving week by week. Did little wrong. Gradually becoming a fine player for Manchester United. Again a contender for man of the match.

Didn’t do much wrong, but didn’t really do anything unreal either. Had his work cut out to keep Cuadrado in check, it was a middling night at the office. Like his team mates, solid if unspectacular. He’s made that left back spot his own now.

How he’s keeping his place at present is beyond me. Slow and sluggish again and his ball retention was poor. After a blistering start to his Old Trafford career, the ageing Serbian’s form has deserted him. As he has so often this season, offered nothing.

If ever a player epitomised United’s inconsistency, then it’s Pogba. Brilliant one week, bang average the next. After a shocking first half in which his team-mates bailed him out, the former Juventus man improved a bit after the break but endured a far from fruitful return to his old stamping ground.

This is Herrera’s fifth season in the red of United, and I still have no idea what type of player he actually is. All bite but no bark. Credited with changing the game against Bournemouth, he is much-of-a-muchness and just seems to run around a lot. Lacks quality and, combative as ever, was harshly booked after the break.

Tried hard but had no real impact on the game. Only just coming back from injury, it was a surprise to see him start. Got taken off after 70 industrious but ineffective minutes in which he was on the periphery.

One of his best games in the Red of United. Led from the front for a resilient and organised United, wasn’t swashbuckling but did his job well. Led the line, linked the play and wasn’t afraid to get stuck in. Much improved from the Chilean.

A man in the form of his life, Martial was United’s most potent attacking outlet and looked most likely to make things happen. It’s no co-incidence that the Reds dramatic late victory came when the Frenchman came to life. A bundle of pace and trickery, he won the free-kick from which Juan Mata majestically curled us level and was involved in the winner. A world away from the peripheral figure who seemed set to leave. Man of the Match again.

Injected pace and energy that co-incided with United’s scarcely believable late surge. Missed a one on one chance with Szczesny that would have sealed the win, but did what he was brought on to do.

This guy is simply special. Only on the pitch for ten minutes, but he changed the game in an instant. Not the quickest or the tallest, but his technical ability and set piece prowess is unrivalled. Scored a wonderful free-kick and boasts a footballing intelligence that many others lack. Credit must go to Jose Mourinho for his substitutions as United somehow completed a late turnaround.

Showed why Mourinho has so much faith in him. He was, in the nicest possible way, a nuisance. Broke up play, won the ball, and was involved in the free-kick from which the equaliser came. As soon as he came on, he started to pose a threat that had previously been conspicous by its absence. Love him or loathe him, you can’t deny that he makes an impact. Back from injury and back in Mourinho’s plans.