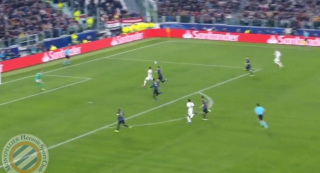 Cristiano Ronaldo scores against Manchester United at the Allianz Stadium.

The Juventus ace scored an absolutely world-class goal to open the scoring against his former club.

Manager Jose Mourinho set his team up to sit deep and it was only a matter of time before the Italian giants found a way to get in behind United’s defence.

And, we can have no complaints about them deserving the lead.

A win tonight for Juve will see them progress into the knockout stages, while United must win their remaining two games against Young Boys and Valencia to guarantee second place in Group H.

United had done well to contain the Serie A champions for the first hour of the match, but currently trail by a goal.

Keep the faith. Juventus are a difficult unit to break down when they take the lead, but anything is possible with the form Anthony Martial is in at the moment.

Watch Ronaldo’s first goal of this Champions League campaign below: