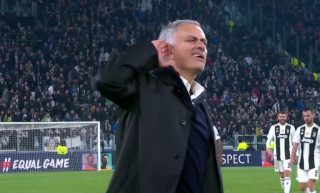 In the dying moments of the game, United were trailing 1-0 against the Serie A champions but managed to score two late goals and take all three points.

If that wasn’t bad enough for Juve, Mourinho took to the pitch at full-time and made a gesture towards the the local fans.

This is vintage Mourinho, the tactician who likes to cause a stir and that is how we like him.

The win should give United a massive lift ahead of the Manchester Derby on Sunday, but it should also see us progress into the Champions League knockout stages.

Juventus were the better team until they decided to sit back and try hold onto their one goal lead. They failed doing that and Mourinho brilliantly rubbed the salt into their wounds after the referee blew the whistle.

The manager should be credited for his tactics on the night.

Talk about raining on their parade!