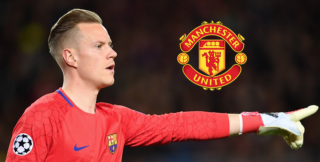 The thought of David de Gea one day leaving Manchester United is a cruel one.

We’ve lost our best players in the past and it’s never an easy blow to take, but few could argue with De Gea if his decision comes down to wanting to win silverware such as the Champions League.

United are nowhere near that level and, as pointed out by The Independent’s Jonathan Liew, manager Jose Mourinho is using Juventus as a reference point to define his own side, similar to how Sir Alex Ferguson did in the 90s, albeit with a different approach.

Should De Gea pack his bags and leave Old Trafford anytime soon, the Reds will need to find a world-class replacement, knowing no goalkeeper in world football comes close to the Spaniard.

Meanwhile, The Mirror claims De Gea’s representatives are trying to push United to offer their client the same salary as Alexis Sanchez.

Fans can only hope finding an adequate alternative to De Gea doesn’t take as long as it did for Fergie to replace Treble winning shot-stopper Peter Schmeichel.

According to Spanish outlet Don Balon, one of the keepers being watched by United is Barcelona’s Marc-Andre Ter Stegen.

The report claims that should De Gea leave Old Trafford, United will make a €120 million move for Ter Stegen, while also making him the highest paid goalkeeper in world football.

That’s a huge claim but one would think to persuade Ter Stegen to leave Barcelona, a club still capable of winning Europe’s biggest prize, United will need to offer a significant pay rise to the player as well as convince the La Liga champions to sell.