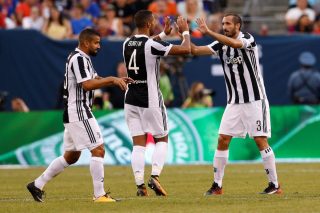 Manchester United’s defence has been a major weakness this season in particular.

The Reds have conceded 18 goals in 11 Premier League games, which is 10 fewer than what we let in during last season’s campaign.

This won’t please a defensive-minded coach like Jose Mourinho, who is now trying to develop the side’s attacking approach and find a balance in defence at the same time, as he admitted this past week via Manchester Evening News.

Leaking goals at the back has contributed to a difficult start to the 2018/19 campaign for United. We’re not only out of the title race but eliminated from the League Cup after losing to Derby County, a Championship side, on penalties.

On Wednesday night, Mourinho’s men take on defensive powerhouse Juventus, who have spent well down the years and can boast a good balance between defence and attack with players such as Cristiano Ronaldo, Paulo Dybala, Leonardo Bonucci and Miralem Pjanić.

Sport Witness have translated a report from Italian newspaper Tuttosport which claims that among United’s possibilities for centre-back signings include Juventus defender Medhi Benatia and Matthijs de Ligt of Ajax.

A previous report from TMW states Arsenal’s interest in Benatia and a reported valuation starting at €15 million.

His experience would be welcome in United’s defence. At 31, the Morocco international has four league titles; two in Germany and as many in Italy. It may be seen as a bargain if the Reds can get him for the price mentioned above.

Meanwhile, ESPN claims AC Milan are preparing to make a January swoop for United’s out-of-favour defender Eric Bailly. It may be possible that United will use funds from such a sale to buy a more experienced defender like Benatia.

Mourinho has opted for a defensive partnership of Chris Smalling and Victor Lindelof in recent weeks, while Marcos Rojo has yet to get a minute of action this season and it remains to be seen whether the manager will show more faith in Phil Jones.

Stability is important in defence as you want your goalkeeper to familiarise himself with a regular back four. Though throughout his United career, David de Gea has rarely used that as an excuse because he’s done the unthinkable so many times.

Mourinho will be watching how Juventus defend and transition into attack tonight. Mindful enough that his current squad is someway off competing for Europe’s biggest prize.