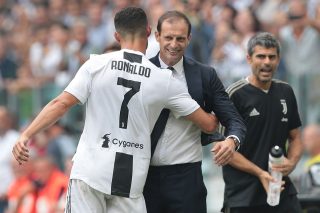 When you have a player like Cristiano Ronaldo in your team, it’s only human to expect him to score whenever he steps on the pitch. We should know.

That’s the standard Ronaldo has built down the years as one of the all-time greats to play the game.

United fans will forever cherish the moments that consisted of watching this young skinny Portuguese kid make a mockery of his older peers up and down the Premier League. Then, one day, hard work would take him to the very top.

In 2008, Ronaldo won his first UEFA Champions League with Manchester United and scored our only goal in normal time. A header from a wonderful Wes Brown cross, with Michael Essien given zero chance of winning the ball in the air against Ronaldo.

Chelsea, however, would take United to penalties. Ronaldo missed him but the Reds still went on to be victorious in Moscow, with some help from John Terry slipping on the spot.

Ronaldo would go on to win a further four Champions Leagues with Real Madrid and now he’s in the hunt for his first as a Juventus player.

Juve manager Massimiliano Allegri has backed Ronaldo to score against his former club at the Allianz Stadium on Wednesday night. It would be his first goal in the competition for the Old Lady.

“He will score [on Wednesday],” Allergi said, as quoted by Four Four Two.

“I mean, it’s not like he played many Champions League matches so far.”

That’s an attempt from Allegri to play down claims Ronaldo is struggling to perform in the Champions League this season, which, is complete bullsh** to say the least.

Allegri is right to back his player and knows Ronaldo enjoys such claims as being a predicted goalscorer.

🎙 @bonucci_leo19: “Tomorrow, we will be playing in a big match that we have to win to seal our qualification. Then after this game we will think about another big game we have against Milan.”#JuveMUFC #UCL #ForzaJuve pic.twitter.com/ll6Mxo7AVi

The thought of Ashley Young trying to deal with Ronnie tonight makes me feel viciously ill.