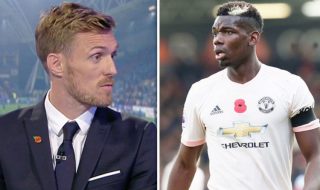 Former Manchester United midfielder Darren Fletcher recalls watching Paul Pogba in the reserves and says he lacked one key attribute to play as a central midfielder during the early stages of his career.

Pogba was signed again by United in the summer of 2016, but his level of consistency continues to be questioned, with the World Cup winner expected to be able to influence games in favour of the Reds.

It is also the belief of many that he lacks discipline as well as consistency, which are two fundamental elements of a world-class midfielder.

However, when Fletcher was battling illness whilst at United, the Scot had a spell coaching the reserve team to gain additional experience.

Speaking to Sky Sports, Fletch opens up about Pogba during that time.

“The first time I spent out with my illness I did a spell coaching the reserve team when it included Pogba, [Jesse] Lingard, [Ravel] Morrison and we played him higher up the pitch in attacking areas,” Fletcher told Sky Sports News.

“We felt like he was the one who would win us game, coupled with the fact he was ill-disciplined in the middle of the park.

“It goes back to a famous game when we felt like he left off the back of against Blackburn [Rovers]. Paul was on the bench and the boss picked Park Ji-Sung and Phil Jones in midfield. We didn’t think he was disciplined enough for the reserve team, never mind the first team at that time.”

Perhaps it was a mistake – to even include him on the bench, as a teasing act – but this is the greatest manager of all-time we’re talking about. Pogba has hardly pulled up trees since returning to Old Trafford and it remains uncertain whether or not he’s ready to justify his mega-money valuation.

According to the Telegraph, Pogba cost United a whopping £89 million and that was a record transfer fee at the time.

While the United midfield still appears to lack something and involves an ageing Nemanja Matic most weeks, it should still be expected of Pogba to win games for the Reds. He doesn’t do that enough.