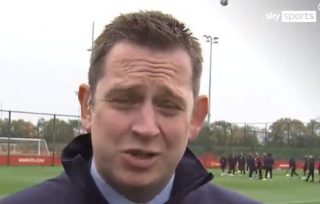 We’ve all heard the stories about Paul Scholes pinging balls at players during training when they’d lurk around the surrounding bushes to have a cheeky wee. Phil Neville told Full Time DEVILS it was like dodging bullets.

However, Marcus Rashford appears to have took on Scholes’ role as tormentor on the training ground.

Rashford has even responded cheekily with a tweet following the incident.

United were preparing for their UEFA Champions League match against Juventus, and it looks like Rashford has his shooting boots ready for the trip the Turin.

Hopefully, he’s just as accurate in front of goal on Wednesday night.

Watch the funny clip below: