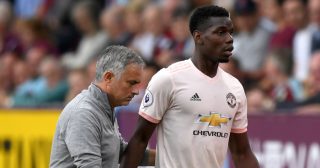 The press in Turin were keen to ask both Jose Mourinho and Paul Pogba about their relationship.

Sources close to Stretty News have made it clear in the past that it could be a lot better.

Though, as expected, neither would admit to having a single issue with one another.

READ MORE: Mourinho rules Lukaku out of Juventus clash; unsure if he will return for Manchester Derby

Mourinho was quick to hit out at the press, as though hard-working hacks from multiple news outlets have a narrative and want to create stories about him falling out with his players.

The manager went on to claim they have a good relationship.

Mourinho made the decision to strip Pogba of vice-captaincy earlier this season and the Frenchman was finally asked to pass comment on it.

“It didn’t affect me,” the former Juventus midfielder said, as quoted by the MEN.

“I’m still playing and really happy to play. The manager is the one who chooses who is going to be captain. If he takes the armband away, it doesn’t change anything for me. I just want to play, perform and give my best for the team, the fans and the club and that’s it. It didn’t really touch me of affect me.”

Finally, Mark Ogden of ESPN asked Pogba about trophies at United after the slow start to the current campaign.

Pogba: “Obviously we want to win trophies, the first year we won three trophies. This is the third one, we haven’t started the best but the season hasn’t finished yet. We’ll see at the end.”

United’s travelling support in Turin will hope Pogba can provide one of his better performances against Juventus on Wednesday night.

The locals will welcome Pogba back to where he was most successful, while Pogba is someway off achieving such feats in the red of Manchester.