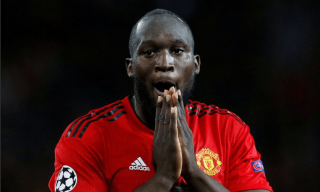 A report has emerged from ESPN journalist Rob Dawson that Romelu Lukaku sat out training ahead of Manchester United’s UEFA Champions League fixture against Juventus in Turin.

The Reds take on the Old Lady on Wednesday night after losing 1-0 against the Serie A champions at Old Trafford.

READ MORE: What Rene Meulensteen said about Lukaku prior to his Man Utd move

Lukaku was dropped to the bench two weeks ago against Everton, but missed the 2-1 win over Bournemouth after picking up a muscle injury in training on Friday. Manager Jose Mourinho spoke to the press after the game to hint he was waiting on a fitness test to decide whether or not to bring Lukaku along with the squad to Turin, as quoted by ESPN.

Although it has not been confirmed yet, Lukaku missing training today may suggest the Belgium international won’t be travelling with the squad for Wednesday night’s game.

The training session this morning was open to the media and members of the press were observant enough to notice Lukaku was missing.

Whether or not he’s still struggling to find confidence, Mourinho will want to take Lukaku with him to Italy but only if he’s available to play.

The boss is expected to comment on that at his press conference later this evening.

But if he’s not available, who starts up front?

While Alexis Sanchez didn’t score at the weekend, he didn’t do too badly up front with Anthony Martial and Marcus Rashford playing at either side of him. That front trio is also versatile enough to interchange in each attacking position, which could prove to be a challenge for Juventus’ ageing defence.

It’s never ideal to be missing your main goalscoring threat, even if he’s out of form, but Mourinho has a number of options to select from with his array of attacking players.

The Reds need to get the system right and find a balance between defence and attack.