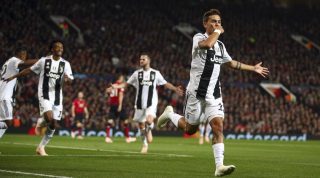 Manchester United were ultimately outclassed by Juventus at Old Trafford when the Serie A champions travelled to Manchester in last month’s group stage fixture.

The scoreline – 1-0 Juventus – hardly resembled the Italian’s dominance on the night, though United did grow into the game after the break once Massimiliano Allegri’s men put their foot off the gas a little.

Paul Pogba came extremely close to salvaging a point against his former club late on when his curling effort hit the woodwork. United must learn from that and take their changes at the Allianz Stadium on Wednesday night.

As things stand in Group H, Juventus are almost at the crossing line with one hand on first place. That all important second spot, however, is up for grabs with Valencia expected to challenge United for qualification into the knockout rounds.

At Old Trafford, it was the homecoming of Cristiano Ronaldo but this time around the Juve faithful will see Pogba return to Turin for the first time since his 2016 exit.

Meanwhile, United go into this fixture with back-to-back wins for the first team this season, but could easily end the week with back-to-back defeats. The Reds have Juventus away on Wednesday quickly followed by another away trip, across the city of Manchester at the Etihad.

Jose Mourinho’s side still look unconvincing at the back and are uncomfortably at their best when trailing in games.

But against the best teams you can’t really afford to be trailing as they’re experienced enough to close up shop and win games. Juventus and City are not Newcastle or Bournemouth.

According to ESPN journalist Rob Dawson, Romelu Lukaku missed training on Tuesday ahead of the squad’s trip to Turin, though we should have confirmation about whether he travelled with the squad this evening when Mourinho addresses the press.

That should see a repeat of Saturday’s front three – Anthony Martial, Alexis Sanchez and Marcus Rashford – but the manager must also find a balance between his defence and attack. A lot of that will come from midfield and Nemanja Matic of late looks like a player after losing his legs.

If United don’t get something against Juve, our Champions League status will be put in jeopardy. That final two matches against Valencia and Young Boys will become must-wins.

A win on Wednesday will see the Reds battle for Group H’s top spot.