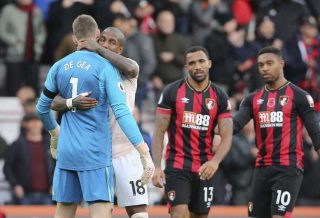 A late Marcus Rashford goal in the 91st minute against Bournemouth gave Manchester United all 3 points. This was a massive goal for United and Jose Mourinho as the team came from a goal down to win after being outplayed for the first 30 minutes. But why are United’s defence so bad at the minute?

Last season by the start of November United had 12 clean sheets in all competitions compare that with this season and United have only had 3 (Burnley in the league and Young Boys and Valencia in the Champions League). In the League after 11 games United have conceded 18 goals compared to just 5, in comparison Chelsea/Manchester City/Liverpool have conceded 17 so far. For Jose Mourinho a notoriously defensive and pragmatic manager this is absolutely abysmal for his side to be so open at the back.

So, what has happened from last season for the defence to be as bad as it had been? On Saturday the first thirty minutes seemed like United’s backline had been plucked out from Away fans queuing at the turnstiles rather than training together all week. As alluded to on the Coaches Voice, we couldn’t handle Bournemouth’s pace and movement and if it wasn’t for poor finishing and solid goalkeeping from David De Gea then it could have been so much worse.

The irony as far as I am concerned is that while United made several changes to the defence over the season rather than have consistent selection they still defended well. This was one of the redeeming features of last season as United secured or scrapped whichever you preferred, a 2nd place finish and considering the personnel in defence is more of an achievement than we realise.

I am not going to dwell on centre backs and their constant chopping and changing because it has been done to death and we all know that there are big problems there that need addressing so I am going to focus on the area where not many people would think we need to solidify. Also, I will not/cannot criticise De Gea as he is the best goalkeeper in the world, but we have to sort ourselves out as he is truly world class and we are wasting his prime years.

Now United only signed Diogo Dalot in defence and sold Daley Blind to Ajax so not much has really changed in personnel. Smalling and Lindelof have cemented themselves as the first choice pairing but for me it’s the full back positions that have caused the most issues.

Last season Antonio Valencia was first choice right back with Ashley Young deputising when needed, whereas the forgotten man in Matteo Darmian seems to have disappeared off the face of the earth since Jose Mourinho took over. Now much speculation was surrounding the Italian full back in the summer and more will be when the transfer window reopens in January.

With Dalot impressing in his only appearance, it remains to be seen if he can make that position his own but for many fans he will be a constant in the team in the future and with Timothy Fosu Mensah impressing in his recent loans at Fulham and Crystal Palace maybe he can return to the squad next season and provide backup to Dalot. Ashley Young has played the majority of games so far and for Mourinho he is just what he likes as he will do as instructed nothing else.

However, it is left back that for me is the biggest concern as last season Luke Shaw was on the outside looking in for the majority of last season and Jose was painted as the villain in this instance. Playing him in cup games rather than the league, so was this bullying as was claimed by Ian Wright via the Express at the time? Or was it tough love? Cases were made for each, but Shaw came into the team this year and has stayed there so this is one in the eye for anti-Mourinho fans.

I have gone to every home game this season barring Leicester and I have watched Shaw closely and I am slowly thinking that maybe Jose had a point in not playing him (not for any personal reasons, more the fact he doesn’t offer the stability Jose needs in that position) and turning to Ashley Young to be the full back that Mourinho traditionally likes, in following the managers instructions (greatest example see United at home vs Liverpool and his game against Mo Salah).

Shaw is very much a free spirit in the sense of he ventures forward a lot to help the left winger but maybe neglects his defensive duties. Now modern full backs do contribute a lot more to attacking play than previous generations of full backs, Pep Guardiola has changed this over the years and it is clearly evident with Kyle Walker and Benjamin Mendy. But the job of any full back is to defend first, do your job as part of the back four and having watched him closely I don’t think he is going to be the player we all think he will be, I would love to be proved wrong but I don’t think we will win any major trophies if we can’t defend.

Now this is MY own personal view but having watched United at home this season I have seen numerous opposition attack the left hand side of our defence. They have strategically targeted that side, so is that down to their strengths? Or more likely to exploit a big weakness in United’s defence, for me it is a case of the latter. Shaw is a good athlete, but he doesn’t sense danger in the way a full back should often leaving the centre half next to him exposed. If you look at the TV footage of certain goals this season when the opposition have scored, keep a look out for Shaw who often appears late in the camera shot as the goals go in. His first instinct is to venture forward and while that is the attitude of a modern full back, it is often at the expense of his defensive obligations. Shaw would probably be better served in a 3-5-2 formation which lightens his defensive responsibilities and lets him attack as he wants to.

A lot of fans seem to think that United’s left-hand side is now untouchable with Shaw at left back and Anthony Martial as attacking left winger, but a case can be made why that is for defensive reasons at least why that is the worst combination. Martial doesn’t track back and do his defensive responsibility at the best of times and Shaw always tries to go beyond him to further the attack, while this is a bonus for an attacking reason it does have its problem. If United’s attack breaks down, then Shaw more often than not is miles out of position and leaves huge holes in the defence which has to be filled by Lindelof or by Nemanja Matic leaving their positions to cover for him.

I still believe that a centre half is definitely on Mourinho’s shopping list, but I do wonder if Jose would have preferred Alex Sandro in the summer and given his solid performance when Juventus turned up and easily held United at arm’s length. Mourinho loves his back four to be extremely solid and build from there and while most fans and neutrals see Shaw’s attacking intent as a positive and part of the grander ethos and mentality of United, the question is it too open for Jose?

One thing is for sure though with Juventus and Manchester City coming up and that is if United are that lax and open then they could suffer two devastating and potentially humiliating defeats in the space of a few days and then straight into the international break where fans would dwell on those results and performances until Crystal Palace at home on the 24th of November. A lot of the line-ups in terms of the defence have been the same but yielded worse results but one thing is for sure at the minute Manchester United defensively are consistently inconsistent.