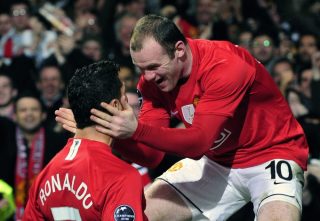 Cristiano Ronaldo has hinted that he would welcome the opportunity to work with former Manchester United teammate Wayne Rooney again.

The attacking duo enjoyed many years together at Old Trafford, even if there were minor tensions following THAT World Cup 2006 spat, as reported by the Mirror.

However, they seemingly made little of that and got on with things to form a formidable partnership at Old Trafford. Ronaldo and Rooney came through at the same time and were very much the image of United during that era, with Premier League and Champions League successes achieved at that time.

Now, with neither playing for United, the two footballing legends are impressing elsewhere.

Rooney is doing wonders in the MLS with D.C. United and Ronaldo is currently with Serie A champions Juventus after completing a transfer from Real Madrid this past summer.

The Portuguese star may have a long-term contract in Turin, but a move to America will always be touted, as is the case with most big players once they hit the wrong side of their 30s.

Ronaldo admits that he would welcome the chance to work with Wazza again at some point, which will undoubtedly excited D.C. United fans, though he’s unlikely to make that move yet given he’s only signed for Juve…

“For me the power of Wayne Rooney is his mentality and strength,” Ronaldo told Goalhanger films.

“He never stops, he always runs, helps the team. He’s a fantastic team player and he scores goals. He scored important goals, for me he’s fantastic.

“He was the kid of England. Everyone loved him. He is a fantastic boy, fantastic player.

“I used to call him, between me and my mates, the pit bull. I remember when he lost the ball he was so powerful, a strong guy, he shoots unbelievable.

“He scored many goals, what can I say? I miss playing with him. The future nobody knows. Maybe we’ll play one day together again.”

According to Goal, Ronaldo signed a four-year contract with Juve. He will want to win the Champions League there before moving on or retiring and there can be no question about that.

Considering how the Italian giants outclassed United at Old Trafford, they’ve every chance to go the whole way in this year’s tournament.

The Reds face Juve in Turin on Wednesday night.

England gave caps to Michael Ricketts & Rickie Lambert. Think that cheapens the shirt more than giving their record scorer a swan song with the money going to charity pic.twitter.com/mbrUyferJj