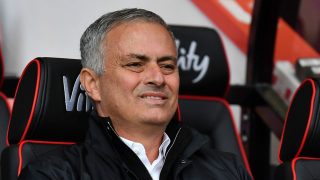 Jose Mourinho’s confrontational nature irks me. The man digs more holes for himself than a family of meerkats. That said, he’s a tactical savant.

I think his insistence that forwards track back was [was] overblown. It left no outlet when defenders cleared the ball. If the wingers couldn’t run onto a clearance before an opponent, the team was trapped. He isn’t leaving three attackers up the pitch like Antonio Conte did with Diego Costa, Eden Hazard and Willian in his title season. If two or three United forwards, rather than one, were lingering around 30-yards from goal, they might be able to claim more clearances and play the emerging wave onto the ball. More counterattacks with the talent and speed Mourinho has at his disposal mean more goals. Fair play, he’s given Anthony Martial and Juan Mata license to leave the box sooner, however.

Bournemouth’s goal on Saturday was a result of that license, I’ll admit. Luke Shaw headed an excellent clearance. United’s defence moved up as a unit. Calum Wilson and two other Bournemouth attackers were well offside but a through ball no one expected on one touch from Lewis Cook while running away from goal undid their high line. Everyone was out of position and leaning the wrong way. Some want to blame Chris Smalling for not staying with Calum Wilson. It’s unfair. The Bournemouth striker always had a head start in that race. It’s a goal where you credit the attack rather than criticise the defence.

Mourinho’s assessment that the entire team started poorly is accurate, though. They’ve been doing so all season. I don’t know how to address the problem. Apparently, neither does he.

It should be remembered Bournemouth didn’t control the game immediately. United attempted to get behind their defence in the first minute. Alexis Sanchez was offside. After David de Gea’s save from Ryan Fraser, Anthony Martial had a shot blocked before Juan Mata made a run too soon, again drawing the linesman’s flag. It was back and forth until the seventh minute, but after three failed attempts United became discouraged. The starting XI’s unable to multi-task early in matches. Either they are caught up the pitch or draw into a shell. They can’t combine their attack and defence from the off. Nor can they defend when in a passive state.

Thankfully, it’s the only complaint the manager can make after the trip south. No half-time oration was required. The team had already reasserted itself. The slow start reappeared in the opening minutes of the second half, but United found their footing much quicker.

While I frequently wish Mourinho would just STFU and manage the team, it’s because when he does, his brilliance takes centre stage. It took years for people to come around on Marouane Fellaini. Fans were infuriated that the lanky Belgian with the floppy hair, sharp elbows and stilted gait was brought in as an impact sub as often [if not more] when United needed a goal rather than to protect a lead. Time after time, he would score only for critics to put it down to luck. When it happens enough, however, people stop calling it luck.

Mourinho reads the game well. His substitutions tend to make a difference. Marcus Rashford finally scored after coming on for Sanchez although a goal already seemed inevitable by the time he did. I’m surprised to be writing that about the Red Devils this term, but it was Ander Herrera’s introduction that inspired my optimism.

Again, the boss inserted a defensive midfielder when he wanted a goal. Their conversation before the exchange, or more to the point, the area on which it focussed made the gaffer’s intent evident. Mourinho spoke in Herrera’s ear while gesturing towards the Bournemouth 18, with the Spaniard’s gaze intently fixed on the attacking third. There was no wall handy for a fly to eavesdrop but I guarantee they weren’t discussing how best to preserve an away point.

When Jose inserts Fellaini, the 6’4″ dandelion invades the box, looking to get his head on a cross or foot to a far-post tap-in. Herrera isn’t as short as people think at exactly six feet, but that isn’t his game. Mourinho saw the Cherries dropping deep, crowding the box, desperately hanging on to what they had. He recognised the open space lay outside the box.

Twice Herrera met balls slotted back into that acreage, narrowly missing each time, once to either side. I remember wondering if he would get a third opportunity like Willian did at Stamford Bridge against Barcelona in last year’s Champions League? If Ander did, I was all in on him making good, too.

Instead, Rashford chested down a cross in added time, then twisted and stretched a foot onto it before his marker could clear the danger. I’ll take it, but Herrera’s efforts provided the time needed to find the ball before a second defender, worried about a cut-back pass, could descend on United’s No.10 from behind.

I still wish Mourinho would behave more like Mauricio Pochettino when someone thrusts a microphone in his face, but the man’s tactical acumen is top drawer.