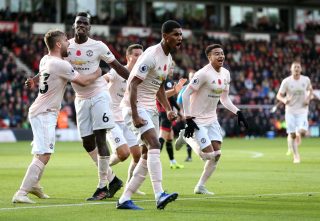 According to @OptaJoe on Twitter, Rashford has scored two 90th minute winning goals in the Premier League for United, joining only Paul Scholes and Robin van Persie as players to do so…

No player has more for the club, so today’s saviour will be looking to become the only United player to do it 3+ times in the near future.

Rashford’s introduction in the second-half helped turn the game on its head.

READ MORE: Football Leaks: Man Utd in talks about European Super League and what it means for fans and the Champions League

The Reds were abysmal in the first-half and were lucky not to be behind at half-time. Anthony Martial’s equaliser came just under 10 minutes before the interval, and United responded by coming out in the second half with a more positive approach.

Fellow substitute Ander Herrera also changed the game, while Alexis Sanchez who returned to the starting line-up played a role in Rashford’s winner and did well throughout.

The 2-1 win over Bournemouth saw United win back-to-back games for the first time this season. Roll on Juventus and City!