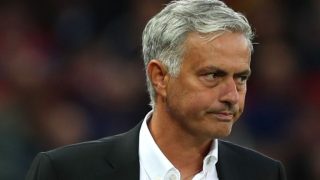 Romelu Lukaku was not part of Saturday’s matchday squad that travelled to Bournemouth due to a muscle injury he picked up on Friday during training.

Manchester United still managed to pick up all three points on the road after forcing a comeback against Eddie Howe’s men.

Alexis Sanchez returned to the side and played a central role in United’s attack. The Chile international was lively without causing too much havoc for Bournemouth’s defence, but he still contributed to our fluidity in attack.

When asked about Lukaku’s fitness ahead of Wednesday night’s away clash with Juventus in the Champions League, Mourinho told a news conference, as per ESPN: “I have to wait until Monday.

“He needs these couple of days. It was something in training. We don’t know — a muscle problem — and we have to wait a little bit.”

With Lukaku absent it was the perfect opportunity for United ace Marcus Rashford to make a statement. The England international came on and scored a late winner to grant Mourinho’s men all three points.

United were woeful in the first-half and deserved to be trailing at the break.

Anthony Martial’s equaliser gave the Reds a different perspective going into the second-half, and that was telling given the positivity they played with following the interval.

Next up for United in the league is the Manchester Derby. Mourinho will want Lukaku back in time to face Juventus and Manchester City next week.

Hopefully, both Arsenal and Liverpool lose later on…