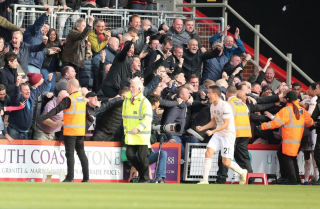 Having conceded early on and shown no signs of reacting, United needed a special moment and got one through an in-form Frenchman by the name of Anthony Martial before the break.

The likes of Fred, Nemanja Matic and Chris Smalling all put in below par shifts and it was Mourinho’s substitutions after the break that made a big difference.

READ MORE: Football Leaks: Man Utd in talks about European Super League and what it means for fans and the Champions League

Replacing Fred with Ander Herrera gave the Reds a massive lift and that showed almost immediately after the Spaniard came on. His performance warrants a start in next weekend’s Manchester Derby.

Fellow substitute Marcus Rashford made a difference at the end, netting a stoppage-time winner, but the England international should have had a brace after squandering an opportunity shortly after making his entrance.

Herrera was understandably delighted with United’s second-half display but conceded Jose Mourinho’s men are making life difficult for themselves. Why is it that we wait until half-time before deciding to come out with a more positive approach? If that happens again, it will be over by half-time against City in a week’s time.

When you don’t know how to celebrate a late winner and you just run 😬🔴👍🏼 pic.twitter.com/njwwBs2rty

“We cannot give the first 25 minutes away. It makes our games more difficult. How we played in the second half was fantastic, but we want to be a ‘whole game’ team.

“I think we have to speak about it in the dressing room, we have to improve the first 20, 25 minutes. Against Everton we were good, but we need to be a team who performs well in the whole game.”