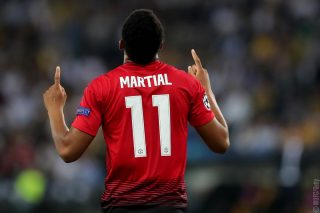 The Frenchman was crowned United’s October Player of the Month this week after acquiring 76% of the vote, ahead of Victor Lindelof and Paul Pogba, as per ManUtd.com. He also followed up that award by winning another, winning the club’s best goal accolade for the same month, announced today on the United’s official website.

He joined the club in 2015 as a relatively unknown prospect and bounced onto the scene scoring in his debut against Liverpool.

Martial has been more productive in recent weeks and looks at his happiest since Jose Mourinho became manager in 2016. There has been growing fears about his development, though his recent form deserves praise.

“Tony Martial, he came from France,” the United faithful sing to celebrate his displays. “English press said he had no chance. Fifty million down the drain. Tony Martial scores again.”

Last season, the former AS Monaco striker netted 9 goals in 18 Premier League appearances but he has already scored four goals from five matches this campaign, as per WhoScored.

This is a fine player in-form at the moment and the video below shows what a handful he can be for defenders.

Talk of a new deal hit a slump recently but negotiations are still underway, according to The Sun.

United take on Bournemouth in the Premier League on Saturday and we’ve tipped a win with Martial getting his name on the scoresheet.