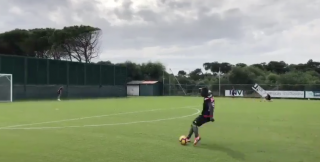 It is evident at this stage of Kalidou Koulibaly’s career that some of Europe’s elite clubs will come knocking for his signature.

Not only is he a world-class centre-back, the Senegalese international pinged an absolutely sensational shot during Napoli training.

Italian source La Gazzetta Dello Sport speculated during the past summer that Manchester United were the unnamed club who had a bid worth £89 million (€100 million) rejected for the centre-back, cited by the Daily Star.

The 27-year-old would make a huge impact at United given manager Jose Mourinho’s struggles to get his current defence in order for the new season.

With Victor Lindelof showing glimpses that he may have what it takes to be a defender for England’s most successful club, the other spot – currently occupied by Chris Smalling — is very much up for grabs.

Despite having made 300 appearances for United since joining the club eight years ago from Fulham, Smalling has never quite looked the real deal and it’s no wonder our defence has been weak for so many years.

It is surprising that Mourinho has failed to fix United’s defensive woes before entering his third year at the club given he is renowned for his defensive coaching.

I mean, WHAT A STRIKE!

Kouilibaly produced another moment of brilliance recently in the UEFA Champions League to stop Paris Saint-Germain ace Kylian Mbappe. We like to call it the Kalidou Kouilibaly School of Defending.

The struggle is real when Kylian Mbappé is facing you with a ball at his feet 😫 pic.twitter.com/qN2YUAWe1k

The question now is will Kouilbaly be on the move anytime soon and if United are genuinely interested in signing one of the best defenders in European football? We should be all over him like a rash.