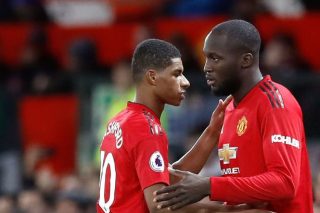 Jose Mourinho was asked whether Romelu Lukaku will start on Saturday against Bournemouth.

The Belgium international was dropped to the bench for United’s win over Everton in the Premier League last time out, with Mourinho admitting his striker has struggles with confidence at the moment, as quoted on Goal.

Marcus Rashford played the centre-forward role instead but failed to make any impact before being replaced by Lukaku, who then received criticism from Twitter folk for his substitute performance. Neither were given adequate service though, as this United side remain dumbfound in attacking positions.

So, there’s a chance Rashford really should be taking if he wants to be renowned as a centre-forward. He’s performing much better for England than he is for United, with Mourinho being hammered in the process.

However, with Alexis Sanchez back in contention to play, Manchester Evening News journalist Samuel Luckhurst asked the United boss if the plan was to start Lukaku against The Cherries. The manager gave a smart response, telling the reporter to ask Lukaku himself.

Mourinho in a jovial mood today, when asked whether Lukaku would start: ‘”Er. Ask him. Ask Samuel.’ #mufc

Of course, these questions need to be asked but Mourinho isn’t going to answer questions on his line-up 24+ hours before the game.

With Lukaku being United’s only real centre-forward though, it will come to the stage that he will have to play through his struggles and find a way to get back scoring goals.

Form is temporarily and class is permanent.

It’s only a matter of time before Lukaku is firing in all cylinders but the Reds need to find goals elsewhere if his form is going to drag into the new year.