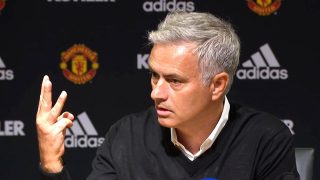 Jose Mourinho was asked during Friday’s press conference whether Manchester United are title contenders or not.

If you asked us in 2016 when Mourinho was initially given the United job, we would have stressed three years into the job a title challenge is considered a must, and that he’d be considered a failure if this side was unable to mount that.

However, Mourinho has not failed on his own. The board, specifically Ed Woodward and the Glazers, have failed Mourinho, with more reports of United chiefs willing to veto the manager’s transfer plans again, as covered by ESPN’s Rob Dawson.

Mourinho gave a good response to today’s question though, and elaborated on his prediction from last week’s programme notes, claiming that United will be in a better position by the end of December.

He expects things to improve and they must. United are currently sat in eight place, knocked out of the League Cup and face a fight to finish second in their UEFA Champions League group.

And while it’s been an underwhelming start to the campaign for United, Mourinho is showing he’s a realist by not making silly statements about our chances. Finishing in the top four is no achievement for a club of United’s stature and Mourinho knows that, but we need to turn things around quickly to avoid a really shocking season.

“When you are outside the top four I don’t think you should speak about title,” Mourinho said, as per the Manchester Evening News.

“When you are top four you can look up, see the distance, look to the fixtures, to the calendar, you can look to the situation at the moment, injuries, suspension, form and then you can feel it but in this moment we are outside top four so the point is now to get the points we need to try and be in the end of December in a better position than we are in now at this moment.”

This United side needs to learn how to win. After three years of Mourinho’s management – the first being a successful one – you’d think this side should be able to boast a winning mentality.

Sadly, that is not evident.