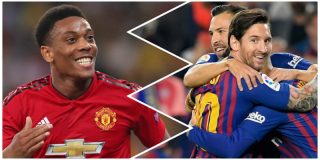 We’re all guilty of talking rubbish after a couple of pints, but let’s hear out Sergio Romero before branding what he believes as crap.

The goalkeeper has likened Anthony Martial’s ball control to Lionel Messi’s in an interview with Manchester United’s official website.

That may sound bizarre as Messi is recognised as one of the greatest footballers of all-time, whereas Martial has only started to replicate form that excited United fans following his arrival in 2015.

But Romero has played alongside Messi for Argentina. He knows the Barcelona star better than most from training and, of course, being in the same international squad.

Romero had a loan spell at AS Monaco in 2013-14, when he was first introduced to Martial. They’re spent longer together at United since then.

“He really is one of the best I’ve seen,” Romero said. “I think that the only player in the world, or who I’ve seen, running with the ball as if it’s stuck to his foot, is Leo Messi.

“He can be going at top speed and the ball is always right on the end of his foot, it never gets far away from his control. That’s why he can do all the things he does.

“But the thing that Anthony has which is quite similar is when he is running at top speed, he can stop the ball absolutely dead, in a split-second.

“That is the same as what Messi does. Leo will be running with the ball, on a mazy dribble, and then all of a sudden he’ll stop suddenly and change pace or change speed, or go the other side.

“Anthony can do that with ease and in fact he has done it many times. He dribbles the ball one way, stops suddenly and then goes the other.”

Only last week it was claimed by Sky Sports that Martial had rejected fresh terms from United, though the same report suggested negotiations will continue.

Losing Martial would come as a cruel blow to United, but we must not forget reports from the summer that suggested Mourinho wanted to sell the Frenchman, as per the Telegraph.

Comparisons with Messi are off the scale and we don’t actually think Romero is suggesting that both players in the same league, as he’s singled out few attributes rather than the full package.

Still, what an incredible compliment for young Martial. Let’s hope he stays at United and shows his current form consistently throughout the season.

The former AS Monaco attacker can be something special for United – as long as he renews that contract!