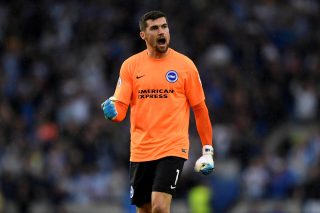 David de Gea has yet to put pen to paper and renew his Manchester United contract which expires at the end of this season.

Speaking a week ago, manager Jose Mourinho admitted he wasn’t confident De Gea would sign fresh terms with the club, as per Goal, and according to the Metro, that left the goalkeeper feeling confused.

One must wonder why Mourinho, who shares the same agent as De Gea, would come out sounding so unconvincing about his goalkeeper’s future.

Now, however, it is being reported by The Sun that United are considering Brighton & Hove Albion shot-stopper Matt Ryan as a replacement for the world-class Spanish no.1.

United are right to be weighing up alternatives to De Gea in the likelihood that he won’t be at Old Trafford for much longer, rather than rushing around the transfer market last minute in attempt to replace the best goalkeeper in world football.

But Brighton’s keeper, Ryan, highly-rated as he is, would be deemed a significant downgrade from the former Atletico Madrid star.

The Sun also claim that Juventus and Paris Saint-Germain are both keen to sign De Gea, with aims to build a formidable enough side to win the UEFA Champions League.

As much of a shame it would be to lose a player of De Gea’s importance, these reports suggest United are not going to sit idle while they wait for the Spaniard to decide on whether he will agree to new terms or not.

Ryan, a respected Australia international, would probably jump at the opportunity to join the Reds, but he has 3 ½ years remaining on his current contract at Brighton after joining the Premier League club from Valencia in 2017.

Our friends at Caught Offside have insightfully noted that Ryan has made the second most amount of saves (43) in the Premier League this term, while keeping three clean sheets in 10 top-flight games.