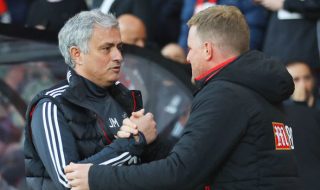 Eddie Howe spoke to the press on Friday morning ahead of Bournemouth’s home fixture against Manchester United.

The Cherries have had a better start to the season than United, positioned sixth in the Premier League with three points more than Jose Mourinho’s men.

Even a win on Saturday is unlikely to see United overtake Bournemouth in the standings as Howe’s side are 7 goals better off on goal difference.

However, Howe says United remain favourites ahead of the game despite our mixed form of late.

Bournemouth, on the other hand, have won nine of their last 13 games in all competitions. They’re only six points off league leaders Manchester City and Liverpool and seem to be getting better each year under the Englishman’s management.

“Players need to know to get anything out of the game, they are going to have to excel, perhaps even above what we have done this season, to get a positive result.

“That’s my message to the players. Whenever you play the elite teams, the big guns, you have to outperform your levels.

“You have to hit your very top to get a result. We have found that before, you can’t play below your best and expect to win. The challenge is to win and go harder.”

Howe also spoke about Mourinho and claimed the Portuguese tactician was an influence on him during the early stages of his career.

EH: “I’ve had some good exchanges with Jose Mourinho. He’s someone when I was in my early stages of management I looked towards. He has an incredible CV.” pic.twitter.com/VxjpxowXdX

Howe has done a tremendous job with Bournemouth and it’s only a matter of time before he is offered a bigger job. Not only do they appear to climb up the table each season, he has them playing attractive football and isn’t afraid to stick by his philosophy against the bigger sides.

They take risks, score goals and never give up. United need to win tomorrow and cannot afford to go into the game with complacency.

Mourinho was also asked to give his thoughts on Bournemouth at his press conference, as per Manchester Evening News.

“Not really, you know their story is a story that doesn’t surprise really because after the promotion was the season of be a Premier League team and stay as a Premier League team and then stability and now they want more stability and they are fighting for this Europa League positions just below the top four target that is a very very difficult target for anyone but fantastic work great stability same manager players basically, clinical, scouting work, clinical decisions about who to buy and when to buy so I wouldn’t say big surprise for me.”