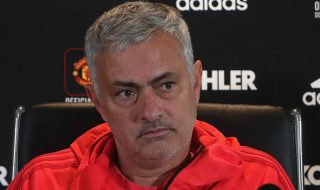 According to ESPN, Manchester United chiefs may veto Jose Mourinho’s transfer wish list again despite the backlash the board received from fans following a failed summer transfer window.

United are sat eight in the Premier League after playing 10 games, eliminated from the League Cup and face a fight to qualify for the knockout stages of the UEFA Champions League.

READ MORE: 15 years ago today, a Portuguese teenager scored his first of many Man Utd goals

It’s been an awful start to the season with the side’s defence still a mess and Mourinho has been left angered by Ed Woodward’s alleged decision to cancel a scheduled meeting, as per the Metro.

How can Mourinho or any football manager succeed in such an environment when it is clear they’re not being backed by their employers, or are the Glazers seriously considering the sale of United, resulting in methods of penny-pinching?

The threat, as worded by ESPN’s Rob Dawson, states “United are prepared to pull the plug on any deal they believe is not in their long-term interests.”

So, after appointing Mourinho in 2016, the club has suddenly decided to plan long-term with their targets…

Would that not suggest it’s time to get rid of Mourinho, a short-term coach, and take all of us out of misery inflicted by this constant power struggle between board members and one of the most successful managers of our time?

Imagine Woodward or another suit telling Mourinho why ‘Player X’ is the wrong fit for his team? Yeah, we actually can…