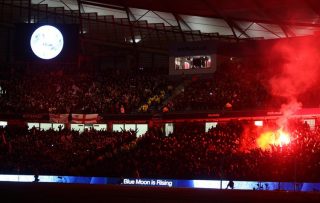 Manchester United have been left disappointed after their plea for more away tickets at the Etihad for the Manchester Derby was ‘largely ignored’.

United were unhappy at last season’s away allocation of 2792, and were hoping they would be given 3,000 away tickets as is the norm with other Premier League clubs. However, rivals City have only increased the amounts of tickets by 70, meaning United  have 2862 tickets for the derby which will be played on remembrance Sunday (November 11).

According to the Daily Mail, United see the very minimal increase as a bit of a ‘mickey take’, and are not impressed by City’s decision. Unlike last season, United are not set to complain to City, as they do not see it as a battle they can win.

City’s reasoning behind the reduced allocation is the ‘increased risk’ of the Derby, as categorised by the Police, who are looking to prioritise security. Last season’s game at the Etihad involved huge clashes between rival fans within the City, and increased security is expected this time out.

Travelling United fans will be hoping for a similar result to this fixture last season, where the game ended 3-2 to the away side after an incredible second half comeback completed by Chris Smalling.