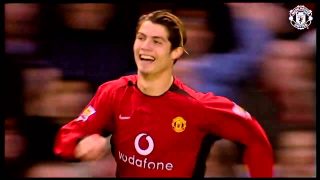 It all started with a scrappy free-kick against Portsmouth.

The exciting substitute performance against Bolton in mid-August 2003 usually sparks conversation among Reds. Everyone remembers that 30-minute cameo display as it marked Cristiano Ronaldo’s competitive debut for Manchester United.

But Ronaldo had to wait until the start of November to score his first goal for the club.

The Portuguese teenager made his appearance as a substitute, along with then-captain Roy Keane, to give United an extra lift despite already leading through Diego Forlan’s first-half strike.

It took Ronaldo just four minutes before he made a goalscoring impact on the game, and moments later fellow substitute Keane increased United’s lead to three goals.

Ronaldo would go on to make a total of 292 appearances for the club, scoring 118 goals, before leaving in 2009 to join Real Madrid. He’s currently playing for Juventus after a mega-money move this past summer.

A look at the team-sheet from that day in 2003 will bring back some memories.

And, it wasn’t his last free-kick to hit the net against Portsmouth!