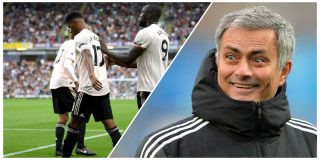 It always seems unfair to directly compare managers with each other as each boss has his own style, his own thought process and his own way of doing things. In this instance, though, it seems churlish not to compare Messrs Guardiola and Mourinho. Both have been in their job a matter of miles apart for two and a bit years and the difference in trajectories have been striking.

In that time, not only has Guardiola revolutionised and remodelled the mob from over the road, but he’s also had the desired effect and turned them, unfortunately, into everything we aspire to be: upwardly mobile, a well oiled machine and the real deal – a fantastic free flowing force that have become the dominant force in England. Anyway, enough of that, it’s too painful to talk about.

READ MORE: Mourinho explains how Martial is finally heading in the right direction with performance levels

Pep has also transformed the form and reputation of several of his City players, men that have gone from outcasts to indispensable under the renowned guidance of the Catalan manager. Raheem Sterling is the most obvious example of where Guardiola has worked his magic – the winger hit 23 goals last season, set against a combined tally off 20 in his first two seasons at the club.

Sterling, to be frank, couldn’t hit a barn door with a banjo until Pep took him under his wing. John Stones, now a defensive lynchpin for club and country, was a raw talent but error prone, Leroy Sane an unpolished diamond and Kevin de Bruyne – now arguably the best pound for pound midfielder in the world – had ability but no end product or nous. Fabien Delph is perhaps the most unlikely player to have enjoyed a renaissance having gone from maligned to magnificent in a single season.

Almost every City player has improved in some way or other under Guardiola. In stark contrast, most of United’s players have gone backwards, or at the very least simply plateaued, since Mourinho arrived. But then again, Mourinho has never been a man to spend time developing and improving players – he prefers ready made, battle hardened lieutenants rather than rough-around-the-edges raw materials. Football doesn’t work that way anymore. We can count on one hand which United players have actually stepped it up under the Portuguese. The same can be said for pretty much any of his previous clubs.

Anthony Martial looked to have been on a downward spiral until his brilliant recent run redressed the balance, but Marcus Rashford has not kicked on, and Alexis Sanchez has gone from world class to woeful in nine short months since his move from north London to M16. There have been many others who have consistently flattered to deceive – Paul Pogba, Chris Smalling, Eric Bailly (although he barely plays) and Romelu Lukaku to name but four. Similarly, none of Mourinho’s signings have exactly set the world on fire.

Luke Shaw looked to be going the same way, but has turned his career around to such an extent that not only has he signed a richly deserved new contract, but he’s come back better than he was before. It’s hard to know how much of his upturn was down to his manager or the player’s determination and hard work, but we can allow Jose the benefit of the doubt when it comes to Shaw.

Mourinho favourite Marouane Fellaini has certainly benefited from his manager’s trust and belief in him. Fellaini will never be fully accepted and will forever remain a divisive figure at Old Trafford but, in a testing 2018-19 so far for the team, the Belgian has rarely let anyone down. He’s become a much more reliable player, he always gives 100% and has found a penchant for the big occasion. Fellaini has improved significantly under Mourinho.

There have been few others: Jesse Lingard last season was Ronaldinho’s re-incarnate in the best campaign of his young career, scoring 13 goals and seemingly every one them a worldie on his way to third place in the Player of the Year vote. Injured for much of the season this time around, he’s struggled to rediscover that form that earned him so many plaudits.

Full-back remains an issue for Mourinho’s United, with two thirty something former wingers hardly the sign of a progressive club. Antonio Valencia is surely coming to the end of his sell by date, but – on the other side – Ashley Young has been given a new lease of life by Mourinho, and he belatedly enjoyed his best season in the red of United in 2017-18 (remember that night he turned into Roberto Carlos at Watford)…

Messrs Young, Lingard, Fellaini and Shaw have all their red renaissance and done Mourinho proud, but the rest of their team-mates are still yet to hit their ceilings. Until that happens, we’ll continue to be Jekyll and Hyde United.