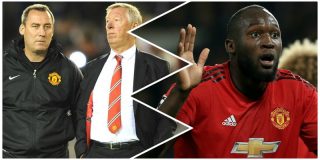 Rene Meulensteen’s accurate assessment of Romelu Lukaku from 2017 is doing the rounds.

The Belgium international is having a dour season thus far, with manager Jose Mourinho admitting he is short in confidence and dropped him to the bench for Sunday’s 2-1 win over Everton, as reported by Goal.

Of course, Lukaku probably wanted to start against his former club but his 25-minute cameo as a substitute hardly set off any alarm bells. It even prompted an angered reaction by many supporters on Twitter as seen here.

Not only is Lukaku not scoring goals or getting into enough danger zones to convert chances, it has also been pointed out that the Belgian striker is failing to link-up with his teammates which is something Meulensteen was critical of prior to his move from Everton to United.

“Don’t get me wrong here, Lukaku has obviously had a fantastic season and he is a goalscorer,” he said, as per talkSPORT.

Meulensteen added: “But at a club like Manchester United you need more strings to your bow.

“What he needs to develop definitely is his game on the ball, in terms of quick combinations with his teammates.

“That is where he falls short, I think, and it’s something that’s not as exposed at a club like Everton.

“But if you play at the highest level, your finesse on the ball in the final third, your decision making has to be absolutely spot on.

“Yes he would bring power, he would bring strength, but when you look over the years at the strikers United have had, does he fit in the same line of strikers? I don’t think so.”

Lukaku netted 27 goals in all competitions last season, including 16 in the Premier League, as per WhoScored. Hardly the worst record but Meulensteen’s views couldn’t be more accurate when talking about the current campaign.