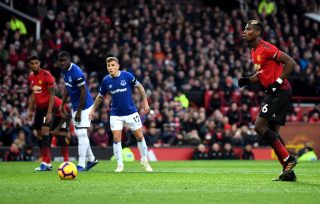 Jose Mourinho has backed midfielder Paul Pogba after his unorthodox penalty run up in Man United’s crucial 2-1 victory over Everton at Old Trafford. Pogba took 26 steps in his run up before having his penalty saved by Jordan Pickford, and was fortunate to score a simple tap in on the rebound.

When asked about Pogba’s bizzare routine, Mourinho said, as per the BBC: “The thing I like is the desire to take it. I don’t like Mickey Mouses, fragile players who are afraid and go: ‘I don’t take penalties.’ I don’t like that.

“I like the player who says, ‘I want to take it’ like the Crystal Palace player Luka Milivojevic. He missed against Everton and today they get two penalties and he wants to take.”

Pogba’s penalty routine has come under criticism already this season, after he took 18 steps before missing against Burnley at Turf Moor. However, manager Jose Mourinho is happy for the Frenchman to take the responsibility, as long as he learns from his mistakes.

“Paul is like that. Can he improve? I think he can. The goalkeepers know his running, they don’t move and they are waiting until the last second for his decision so he has to learn from that but for me the most important thing is he wants to go again.”

Pogba himself admitted he was ‘lucky’ to score the rebound after the poor miss, before explaining his thinking behind the run up.

“I always try to destabilise the goalkeeper. Maybe they know how I take penalties. Maybe I should practise to change it, if the keepers know my step.”

The routine has fumed many United fans on social media who were angry at the slow, rather painful technique from the World Cup winner. Pogba got away with it this time, but it will not go down well if a similar event costs his side points later this season.

Make a comeback in your career and renew your contract. #ThingsYouCanDoDuringPogbasPenaltyRunUp pic.twitter.com/sxGx6C1i11