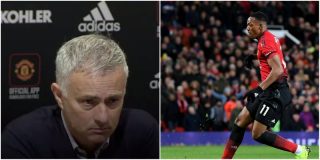 Everyone wants a bit of Anthony Martial at the moment. The Manchester United starlet has exploded back into form and the press were adamant about asking manager Jose Mourinho about his development.

Part of the eagerness to hear Mourinho speak about Martial is down to the pair’s relationship, which reportedly saw the gaffer make a request this past summer for the attacker to be sold, as per the Manchester Evening News.

Moreover, Martial’s representative, Philippe Lamboley, insisted during the summer that “the time has come” for his client to move on, as reported by The Guardian.

The Frenchman’s alleged Old Trafford exit never materialised but he recently rejected fresh terms from the club, as per Sky Sports, with his current deal expiring next summer and an extension option only available for a further year.

But Martial has looked United’s biggest threat going forward in recent games, scoring four in our last three Premier League fixtures. Last season he netted just 9 goals in the league (via WhoScored), so it’s to be expected that he hits double figures this term, especially if his form continues.

The video below sees Mourinho explain how Martial has developed as a footballer.