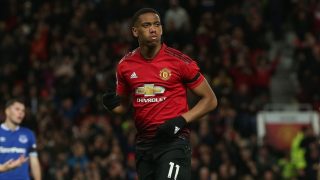 I was only able to take in the second half of United’s 2-1 victory over Everton on Sunday. The reason? I was earlier in the presence of greatness, an audience with Eric Cantona to be more precise.

The King spoke in detail on stage about his time at United, and his life in general, before heading back to the Theatre of Dreams — his ultimate stage.

READ MORE: Mourinho explains how Martial is finally heading in the right direction with performance levels

During the speech, he spoke in his unmistakable Gallic riddles which conjured some memorable lines. I won’t go into his thoughts on Mourinho in too much detail, however one line struck a chord with the vast majority of the paying audience:

Manchester United should play with freedom and entertainment, a sentence which drew rapturous approval from his listeners.

One man who is embodying that currently is Cantona’s fellow countryman Anthony Martial. Within five minutes of the restart, the first five I was able to take in, Martial was taking in the adulation of the United faithful, ‘£50 million down the drain, Tony Martial scores again’. It is a chant that we are hearing on a more regular basis and is music to everyone’s ears.

Freedom and entertainment are being provided by United’s number 11, any time he gets on the ball the crowd sense something, you’re on the edge of your seat and proven full-backs even as good as Seamus Coleman are struggling to handle Martial.

Excitement has seldom been felt by match goers or television viewers of late, so Martial’s form is something to be cherished and has been a real highlight. In fact, that left side in general, with Luke Shaw a real contender for player of the season already, has been a joy to watch recently.

It is well documented that Martial has failed to get Mourinho’s unconditional approval, however we are now seeing, as we did with Luke Shaw, that instead of dissenting to Mourinho’s tough love approach, young players can actually thrive under the opinion dividing Portuguese.

Make a comeback in your career and renew your contract. #ThingsYouCanDoDuringPogbasPenaltyRunUp pic.twitter.com/sxGx6C1i11

What United cannot afford to do consists two fold: A) Repeat what happened last winter in dropping Martial whilst he’s in red hot form for Alexis Sanchez and B) Allow contract talks to remain at impasse stage.

Martial is very much a confidence player and many have, rightly, claimed that Mourinho fails in the man management stakes. However, the manager is purring at what Martial is producing at the moment, which in turn will have confidence oozing through his ice-cool veins.

Martial’s contract, like David De Gea’s is delicately placed with not too much time remaining on it, though United have the option on both to extend by a year, as noted by Sky Sports. United, with their business heads screwed on, know that Martial has potential which cannot afford to be realised elsewhere and they can ill afford another youngster in the ‘ones that got away’ bracket.

Martial’s current form means he is surely well on the way to securing a new contract and the United money men should be doing their utmost to tie down one of Europe’s up and coming talents. He feels the love of the United faithful and, dare I say, his manager? Who would have thought that when Martial failed to return for the remainder of the US tour in the summer?

It has been a staggering turnaround but perhaps we should have seen it coming: With Sanchez again failing to deliver, Martial is perhaps United’s only wide man with genuine stardust.

Let’s hope he sprinkles some more on Bournemouth at the weekend to burst their bubble a little.

On a wider point, the powers that be need to understand what a talent they have on their hands, like Mourinho is starting to do. The manager deserves some credit for getting the highest quality out of a previously inconsistent Martial.

So my message to the money men is… give Martial what he wants.

As he is showing, £50M is most certainly not going down the drain.

The King will no doubt have approved.