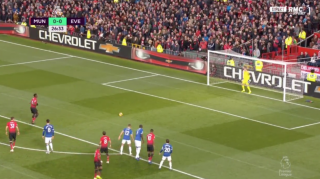 Manchester United opened the scoring through Paul Pogba against Everton after netting from a rebounded penalty.

Anthony Martial was took down inside the box by Gueye and left the referee with no other choice but to award a penalty.

However, Pogba’s penalty was nothing short of pathetic. His run up to the penalty, or whatever you want to call it, looked like a toddler after learning how to walk for the first time.

Instead of stuttering his way towards the ball, why didn’t he drive through the ball with a proper stride?

But Pogba was in the right place to rebound his penalty into the back of the net.

Marcus Rashford had a goal disallowed shortly after United opening the scoring for being offside after Jordan Pickford let another Pogba effort slip out of his hands.

More goals when we have them!