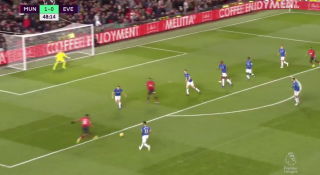 The Frenchman gave Jordan Pickford no chance as he bent his effort around the Everton goalkeeper.

Teammate for club and country Paul Pogba will be credited with the assist as he passed the ball across Everton’s box and into Martial’s path.

United currently lead 2-0 at Old Trafford and look set to collect all three points and jump from 10th to 8th in the Premier League standings.

Martial is in super form at the moment and will be demanding a huge pay rise if he’s to sign fresh terms with United.

The fans will hope Mourinho and is other teammates have a word in Martial’s ear about staying put.

If United can’t keep hold of Martial, the club risks losing a player of this pedigree on a free transfer.

Another goal would be the icing on the cake.