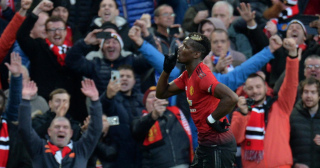 Manchester United climbed from tenth place to eight in the Premier League after beating Everton 2-1 at Old Trafford.

Below we have rated each starting United player:

Wasn’t really troubled until Everton’s penalty as most of Everton’s attempts on goal were directed straight at him, but he didn’t let anything slip. Focused as ever, even if his future hangs in the balance.

Did okay as we expected more danger from Bernard, so Youngy can be given credit for keeping the Brazilian reasonably quiet. He was aggressive throughout.

Never really troubled and we’re thankful of that. Not yet reached that dependable stage of his career and the jury is still out.

Gave away the penalty for Everton’s goal. It was like something I’d seen at a recent Sunday League match.

Not one of his better performances this season. Did well to get forward at times but Theo Walcott was able to find space in behind Shaw all too often. Still, made some important tackles and interceptions in the second-half.

Keen to make an impact from the first minute which people will appreciate. Though, he gave away the ball far too easy at times and that broke down United attacks before they even started.

Where do we start? His first effort on goal that went out for a throw in? His show-pony rubbish led to Everton pulling one back? The pathetic stuttered run-up to his penalty which Jordan Pickford saved? Pogba’s rating would be lower if he hadn’t scored the rebound or set up Martial. It’s beyond frustrating how he thinks he’s a lot better than what he really is…

Grew into the game more after the interval. Tidy player, always capable of something creative. Happy he’s back starting games.

Played that central role and struggled to pick up the ball in positions where he could run at Everton’s defence. Think our midfield sat too deep to accommodate him.

A threat to Seamus Coleman throughout the game and topped it off with a beautiful finish it make it 2-0. Wasted opportunity to net a brace at the end, but he’s a boy in form and must be persuaded to sign fresh terms.

RECOMMENDED: Napoli vs Roma Live Stream: How to watch the Derby della Sole online or on TV