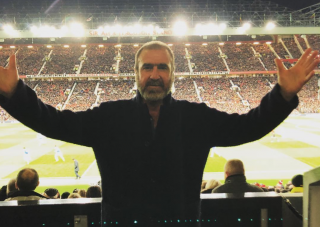 All hail the King!

Eric Cantona was in attendance at Old Trafford as the Reds claimed all three points in a 2-1 win against Everton.

Goals from Paul Pogba and Anthony Martial saw Manchester United cross the line against Marco Silva’s men, who made attempts to find a late equaliser after pulling one back through Glyfi Sigurdsson in the second-half.

Cantona, whose name will forever be sung by the United faithful, enjoyed the game as our currently French Connection ran wild.

Pogba had a mixed performance; glimpses of brilliance and moments of complete and utter stupidity. If the last few weeks told us anything, it’s that manager Jose Mourinho needs to work on getting his two most talented stars at their best for the remainder of the season.

The two French stars are without question our most talented players and it is the gaffer’s job to ensure they play their best football at United.

That’s what everyone wants, right?

Anyhow, we couldn’t go tonight without sharing a Cantona appreciation post, especially given how he was pictured at the game.

Great to be back at Old Trafford! #manchesterunited