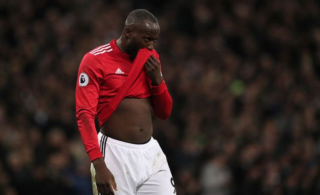 Manchester United picked up all three points against Everton in a 2-1 win at Old Trafford, but many fans were still left frustrated by Romelu Lukaku’s 25-minute cameo from the bench.

The Reds held on at the end after Everton pulled one back through Gylfi Sigurdsson. The Iceland international converted his penalty following a poor challenge inside the box by Chris Smalling just seconds after Paul Pogba’s showboating lost possession.

Marcus Rashford started the game up front and made little impact before being substituted after 65 minutes. He was replaced by Romelu Lukaku, who sparked a bad reaction on social media for his performance.

Perhaps this is all a bit unfair given how manager Jose Mourinho had publicly stated that Lukaku is struggling with confidence (quoted by Caught Offside before kick-off).

A striker lacking in confidence is always going to struggle but once he gets through this dark period, Lukaku will be banging in goals again.

Gary Neville shares this view as he described Lukaku’s form as a dip rather than a slump earlier this week, as per the Manchester Evening News.

However, Twitter is full of negative remarks on Lukaku right now, as you can see from the tweets below:

Lukaku is so finished man

Since Lukaku came on we’ve been shocking. 🤔 #lukaku #mufc

Our play has been awful since lukaku has come on #mufc

One lesson from this game is that King Lukaku disrupts our play. When he’s on, the players just want to lump the ball to him. Bench him

And, for something we find ourselves agreeing with…

Lukaku currently carries inauspicious title of “#MUFC Scapegoat of the Month.” While I’m aware of his glaring limitations, just remember his impressive tally last season before slating him. Cole oft missed good chances too. Difference; Andy was given plenty more to redeem himself

This, too, is fair constructive criticism rather than claiming the Belgian is finished.

Lukaku coming on really hindered at the end. Rashford was making runs and pulling the Everton defenders about. Rom was just standing haplessly still.