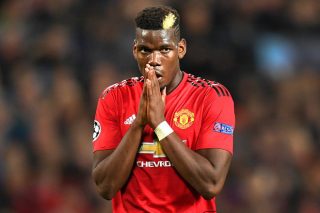 Manchester United will look to get back to winning ways in the Premier League on Sunday when they host Everton at Old Trafford.

The Toffees are currently positioned eight in the PL table, while the Reds are below in 10th. Just one point separates them.

News emerged from the Sunday Times suggesting a recent gagging order inflicted on Paul Pogba by the club remains in place, meaning we shouldn’t expect to hear from the World Cup winner before or after the match today.

The report claims Pogba met with journalists in the mixed zone after the Juventus game to tell them the following:

While saying this, Pogba did not reveal who had made the order, but his tensions with Jose Mourinho will make the manager chief suspect.

Pogba has been rather vocal about his unhappiness this season and with reports of a summer exit, as per 90min, Mourinho probably wants to keep a lid on things.

Too much leaked info leads to uncertainty in the dressing room.

It remains to be seen who will partner Pogba in midfield against Everton. Fred has been left out of a number of games rather questionably, Nemanja Matic looks cooked and Andreas Pereira was pulled from the team despite some promising appearances at the start of the season.

Despite spending £52 million on Fred this past summer, as per the Irish Mirror, Mourinho doesn’t seem keen to play him in most games, but he’d help increase the tempo in games when United are chasing games which has been much of the case this season.

Hopefully they start on the front foot against Everton.