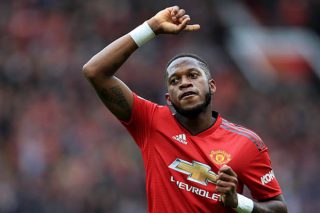 Jose Mourinho has named his Manchester United starting eleven to face Everton in the Premier League.

Much of the talk before the team news was revealed suggested Romelu Lukaku would be dropped from the starting eleven after going eight games without scoring a goal. Those whispers were right and Lukaku has been benched along with Alexis Sanchez.

Anthony Martial and Marcus Rashford start in the attacking roles and will be accompanied by Juan Mata.

There is also an inclusion for Fred in midfield, partnered by Paul Pogba and Nemanja Matic.

Everton (8th in the table) have just one more point than United going into the game, so this is an opportunity for us to climb up two places in the table by claiming all three points.

A bad result could see Mourinho back under intense pressure to keep his job at Old Trafford. There can be no excuses if The Reds don’t get a win at home to this Everton side.

The boss mentioned in his pre-Everton programme notes that he predicts our situation in the league will be different by the end of December. By different, we hope better and not worse!

United’s turnaround must start today. Hopefully, Paul Merson’s prediction comes off by suggesting this is when the shackles come off, though we shouldn’t get ahead of ourselves even if today sees a comfortable win.

Recent years have shown once the Reds take a step forward, it is quickly followed by two steps backwards. We are consistently inconsistent!

Both sides shared their confirmed line-ups on Twitter prior to kick-off:

RECOMMENDED: Barcelona vs Real Madrid Live Stream: How to watch El Clasico online and on TV