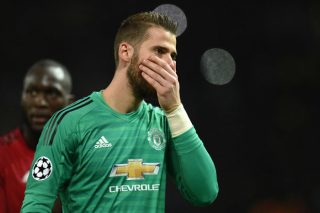 Real Madrid are no longer a concern when it comes to losing David de Gea following their summer capture of Belgium no.1 Thibaut Courtois.

The Spanish giants had long standing interest in signing the Manchester United shot-stopper, but thanks to some dodgy fax machine a deal never materialised three-years ago. It fell through at the last minute, as Joe.co.uk explains, and we couldn’t believe our luck.

However, the latest to come from De Gea Watch suggests there may be interest from Serie A champions Juventus, who were victorious at Old Trafford midweek.

With De Gea still yet to sign a new contract, the longest United can keep hold of the world’s best goalkeeper without fresh terms being signed is 2020 (requiring an extension clause).

✅ David de Gea has been added to your shortlist. pic.twitter.com/bDjjSMIvDn

When you look at Europe’s elite and their respected keepers there aren’t many clubs in real need of a new goalkeeper. Juventus, however, is one that stands out like a sore thumb.

Currently standing between the sticks for The Bianconeri is Arsenal reject, Wojciech Szczesny, who belongs to the elite bracket no more than Tim Howard.

There is room for improvement and that’s the part we find most frightening about The Sun’s report claiming De Gea is personally aware of the alleged growing interest from Juve.

Being aware and intending to explore interest are two very different things, however, it’s definitely a concern that parties have yet to agree on anything since talks began in the summer.