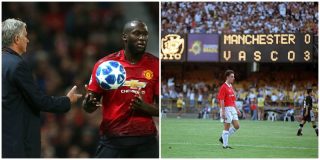 Romelu Lukaku has not scored a goal in eight games and questions are starting to be asked of Manchester United’s main attacking threat.

Unlike Zlatan Ibrahimovic, who Lukaku was brought in to replace, the Belgian appears to be struggling with the responsibility of leading the line for United.

His form has dipped significantly since last season when it looked like Lukaku had improved his all-round game. Now, he appears to have gone backwards.

But while manager Jose Mourinho admits Lukaku is not firing on all cylinders, he is confident the goals will come.

Mourinho does not fault his striker’s effort despite the recent goal drought.

“He is not linking the game well with the team.

“But he is our striker and he is a good striker we believe in.

“Romelu is a hard-working guy and a good professional. One day the goals will arrive and the confidence will be back.”

United’s next test is against Lukaku’s former club Everton and ex-player Gary Neville insists Mourinho should keep playing the Belgian.

Neville is of the view United’s £75 million forward is going through nothing more than a dip in form.

“He’s got to keep playing,” Neville is quoted by the Manchester Evening News.

“The longest period I had was six months after the Vasco da Gama game [Club World Cup in 2000] when I made the two mistakes.

“I lost my confidence for the six months going into the European Championships but I kept on playing through that period and in the end I came out of it at the other side.

“You play them through those bits of bad form and continue to give them that belief because you know full well they’re still contributing when they’re not playing well.

“I think that unless a player like Lukaku is feeling so down that he feels as though a break will do him good, you do try and keep them playing.

“But the top players tend to play through those dips in form.”

Neville also states that there is a bit of favouritism going on under Mourinho at Old Trafford. The manager’s comments would suggest just that, and that he is not ready to pull the plug on his 25-year-old attacking threat.

Apparently Michael Owen has told Romelu Lukaku “there’s no hiding place at Manchester United”. A Premier League winner’s medal for one start and 10 substitute appearances has told me to the contrary.

Fans have drawn comparisons to Anthony Martial and Marcus Rashford given a mistake or two one week would see them dropped from the team for the following game. That doesn’t happen with Lukaku but as Neville alludes to, some players get that leeway whereas others must earn it.

“If David De Gea makes a mistake, no one’s going to start going crazy about it because we know full well that players make mistakes. It’s when those mistakes become regular.

“When you build up a faith, with everyone thinking you’re a great player, it takes a lot then to say that something is not quite right.

“Romelu Lukaku is nowhere near that. It’s a dip, it’s not a slump.”

Mourinho is clearly waiting for that penny to drop for Lukaku this season, hoping that once he starts scoring goals again he won’t be able to stop. United need that presence up front.

Full details of Mourinho’s press conference can be found here.